Select a Country or Region

Modern installation materials today make it possible to offer solutions for virtually all requirements in flooring structures. In the area of renovation work in old buildings, however, we are reaching the limits where new flooring needs to be levelled out over a large area, such as sagging ceilings.

The additional weight often puts strain on the existing subfloors or ceilings to the limits of their load-bearing capacity, and in doing so severely limits the design options. In this instances, flooring structures based on cement or calcium sulphate screeds would cause impermissibly high loads or undesirably long drying times,
precast screeds would in turn be more expensive to construct and could be subject to restrictions in choosing the floor covering or accommodating loads.
Intelligent combinations of established installation materials have now succeeded in conveniently solving the problems depicted for the user and allowing for completely new applications: In the UZIN Turbolight system, individual components can contribute their respective specific properties to the building as a whole, resulting in a compound system with maximum synergy. This construction combines the special strengths in system components, like high cohesiveness and short installation times, while
drastically reducing unwanted properties like high weight of floor covering. This results in a novel system of a flooring construction that is unique in its overall performance.
Details will be described in the following about the flooring construction and its performance, and the application will be illustrated in practice with reference to the objects listed. Their function within the system will be expounded on in the following.

A light smoothing mortar with relatively high strength forms the substructure for the Turbolight system. This transfers occurring loads even in layers of different thicknesses, such as uniform outbursts on the supporting substrate or the supporting ceiling. Though it can be manually mixed too, with a stirring machine or gravity mixer and then installed. Installation is generally done by bonding. If needed, for example if trickle protection is necessary, installation can also be done on a separating layer. Then the minimum thickness is 3 cm, and extraction at transitions can be done without a problem except for grain diameter (approx. 5 mm). Thus adaptation to uneven substrates is guaranteed maximum flexibility. The drying time is 48 hours for up to 30 cm thickness.

UZIN RR 201 renovation fleece: The system is reinforced with a fabric made of long-glass fibre with high tensile strength. It is installed directly on the hardened light smoothing mortar. Tackifying the fibres within the fabric is done with a water-soluble adhesive. This dissolves as soon as the thin screed is applied in the next step, and the reinforced fibres can scatter in the lower part of the compound. The resulting high-strength fibre composite contributes significantly to the exceptionally high load capacity of the entire system.

Thin screed UZIN NC 195: This system building block is specially adapted for the light smoothing mortar due to its grain size distribution. At the boundary layer between the light smoothing mortar and the thin screed, there is a deep interpenetration. This homogeneous compound thus ensures optimum load transfer. The high-strength load-distributing layer from the fibre-reinforced thin screed allows it to reliably absorb even the critical point loads, and divert safely them over the homogeneous bond zone into the supporting ground.

The UZIN Turbolight system’s advantageous load capacity is clearly recognisable if you compare the results in a pressure test between light smoothing mortar coated with only thin screed, that is, with no reinforced fibres, and coated with the UZIN Turbolight system. The unreinforced construction shows a steep increase to the failure stress point in the force/path diagram. This is a relatively rigid system that breaks down due to brittle fractures. The UZIN Turbolight System is different: The increase is similarly steep but the failure load becomes higher by about 30-50% once a substantially longer route has been achieved.

The UZIN Turbolight system thus shows a very high load capacity while also displaying good load/path characteristics. The two together attest to the system’s sturdiness. This feature can be quantified by the area under the force/path curve. It matches the energy absorption capacity and is thus a measure for the resistance of the system against mechanical load effect. The UZIN Turbolight system proves to be four to five times as strong as the unreinforced system.

As previously described, the UZIN Turbolight system’s unique combination of properties is particularly advantageous in the area of renovating. In Image A, a ceiling is noticeably sagging, a situation with which installers are often confronted.
The sagging parts of the ceiling were equalised with the light smoothing mortar in the home here. 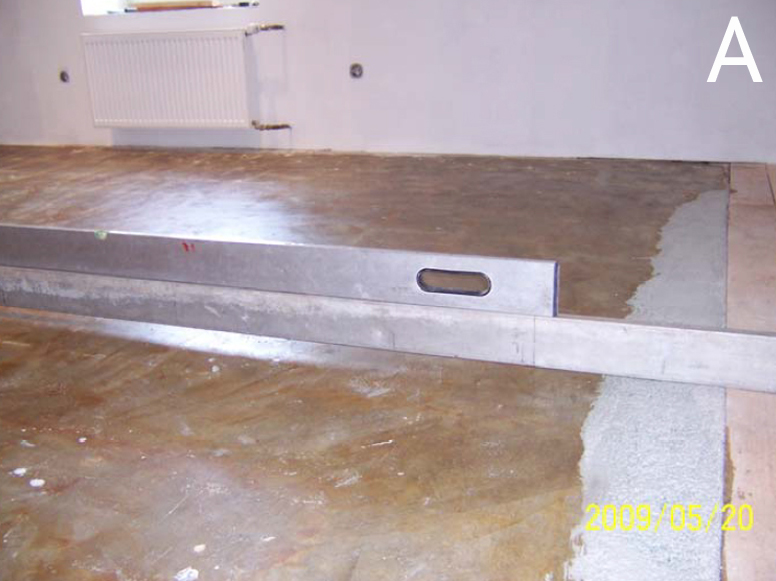 Afterwards, the rooms were completely covered with the UZIN RR 201 renovating fleece and then the thin screed was incorporated. Two-ply prefinished wood flooring in oak was installed as a surface covering. Image C shows the conditions that often arise in renovation work: The recess there in the floor was smoothed out with light soothing mortar, and the area as a whole was reinforced/levelled as described above.

Image D is from a building in which parts of the subfloor were prepared with OSB. In parts of the property and especially in the doorways, the OSB could not be installed due to the insufficient height of the structure. Those parts were smoothed out according to the height specifications. 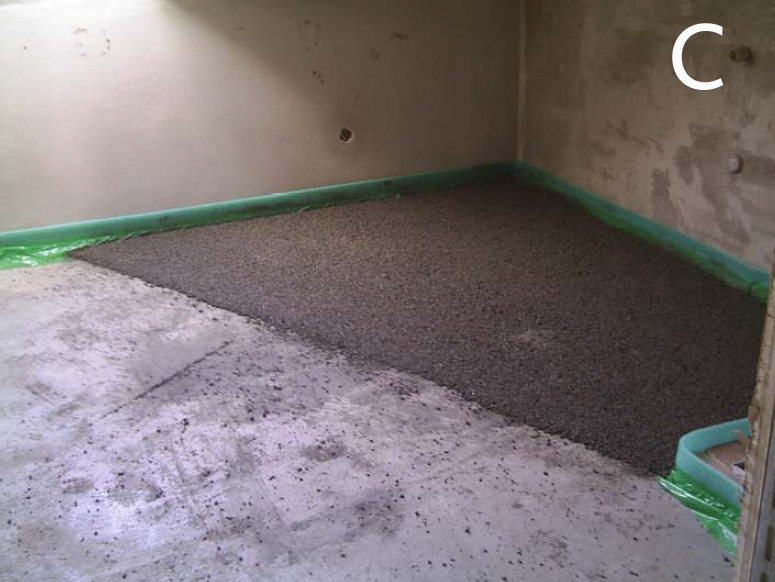 Next, the whole area was reinforced (Image E) thin screed was incorporated. By using pumping technology (Image F), it was possible to put in a new load-bearing subfloor that can be covered with wood flooring throughout the building in just four working days. 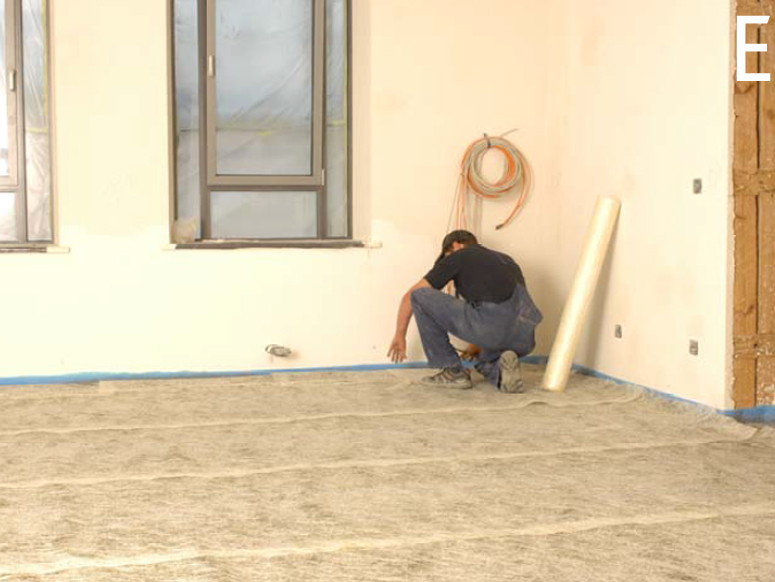 Properties of the UZIN Turbolight system

The most important technical characteristics of the UZIN Turbolight system are summarised in chart 1 (the properties of individual components are not illustrated at this point - they can be looked up with the manufacturer via the usual channels if need be).

In accordance with DIN 1055, it can fulfil all load requirements of class A (residential areas) and B1 and B2 (office areas). Along with the low weight of floor covering, the impact sound absorption of the system, relatively high with 10 dB, is also worthy of note (structure height 5 cm) and comes in handy for renovations in old buildings. The time it takes for the UZIN Turbolight system to be ready for covering depends on the type of surface covering. It is summarised for the different types of floor covering in chart 2.

The surface coverings can be adhered directly onto the thin screed with the floor covering adhesives tailored for that, observing the recommended drying times. For resilient floor coverings, it is recommended that the intermediate coat be a fine levelling compound. The UZIN Turbolight system can also be used in damp spaces. In this instance, a levelling compound sensitive to moisture must be substituted. Inclined substrates for drains, such as in baths, can then also be created with suitable rheological properties.

Chart 3 illustrates the properties of the UZIN Turbolight system in practice by comparing to conventional cementitious screed or precast screed.

The UZIN Turbolight system is a flooring construction made from reliable installation materials. The intelligent fine-tuning combines the strengths of the individual components in such a way that the result is a system structure with a brand new combination of properties. This opens up new possibilities for solutions in floor constructions, especially in renovating. In addition, the system gives the floor installer maximum assurance in case of warranty issues, since he can work from the top edge of the supporting substrate up to the floor covering when building up a new floor construction as a system of matched installation materials.